Never has such a landscape been painted. And yet all the simplest and usual elements of a landscape painting are there: sky, hills, a city, the deep gorge of a river, trees, meadows, roads. But the main thing is missing: the feeling of space, of distance. Dominant, instead, is what in painting is usually conveyed by the human figure only: the feeling of activity, of drama. The sky is rent catastrophically in a chaotic rush of its clouds; while the earth dashes to meet it in an upward surge. The movement of the hilly roads, now crossing each other, now separating, forms a curious ornamental and active pattern of interlaced triangles. There is a strange rearrangement of the topography of Toledo: the Cathedral placed on the wrong side of the Castle; the imaginary city gate with trees; the changed architecture of the towers of Alcantara bridge. The city is presented both full-face (buildings showing their facades) and in profile (their accentuated flattening), and there is a subtle contrast between this flatness-including the ornamental flight of the roads and the bulging of the great clouds, swelled with heaven's lightings, heaven's wrath and heaven's blue.

This menacing anger is accumulated its symbolic darkness is thickened behind the zone of Toledo's most conspicuous and haughty buildings: the Cathedral and the Castle, the Alcazar. The threatening dark wrath of the sky points to the stormy embodiment of the joint powers of the city: the power of the Church and the power of the State. Indeed, why is it that the colors of the sky's wrath are absent from the earth? And why so peaceful and indifferent to the storm the activity of all these people, microscopic, needle-like people, scattered among the green, walking toward the gate of the city or busy on the bank of the Tagus ? Why, if not to tell us the peace of all that is detached from the menacing city, that does not belong to it?

View of Toledo was centuries ahead of its time, and probably can best be compared to Vincent van Gogh's Starry Night, 1889, which contains many of the same compositional elements (a swirling sky, overwhelming nature, a skyline dominated by a church). But whereas van Gogh evokes the calm of a little sleeping town, El Greco's painting captures the violence of the exterior world against an interior one. 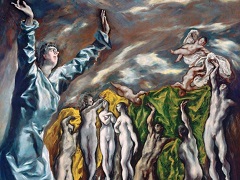